The Gilded Lily by Deborah Swift 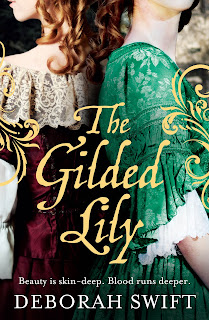 I was inspired to write The Gilded Lily by three things. First, the power of the stories we hear as children. Second, the Frost Fairs on the frozen Thames in the 1660's. And third, but not least, the contrasting characters of Ella and Sadie Appleby.

As a child I devoured books and stories of all types. One of my earliest memories is of my parents telling me fairy tales about Little Red Riding Hood and The Billy Goats Gruff, and hiding under the bed from the Big Bad Wolf. I had several dilapidated old books from my mother called "The Golden Wonder Books" which included tales of the Brothers Grimm, Tales from Shakespeare, Aesop and Homer, and poetry, all gorgeously illustrated by artists such as Arthur Rackham. From these stories I learnt about Knights and Princesses, about high morals and good behaviour. When I grew up I think I subconsciously looked for a Knight to sweep me off my feet, and it took me quite a few relationships and a divorce to realise that it wasn't going to be quite that easy! The values of the stories that we read seep in to us, but not just the stories we read, the stories other people tell us about ourselves. Ella Appleby has always been "the pretty one," and Sadie her sister "the skilful one" (and by implication, not pretty.) How does this affect them when they have to start their lives again from scratch, and must make their way in society? Ella tells stories all the time, but what is the difference between a story and a lie?

In the 1660's England was gripped by The Little Ice Age. Temperatures in the City of London dropped so low that the Thames iced over and the life-blood of the city froze in its veins. But London was just recovering from years of Puritan repression where all sorts of entertainment had been banned. The bears in the bear-baiting pits had been shot, not because bear-baiting was inhumane, but because the Puritans thought it was just too entertaining. So when Charles came back to the throne people were ready to celebrate and the frozen Thames provided another excuse for entertainment. The Frost Fairs had tented booths with alehouses and coffee shops; there was skating and ice bowls, jugglers and musicians. The King even paraded his horse guards over the ice. The combination of extreme weather, where birds froze in flight, and the determination of the people to nevertheless enjoy it, was a fascinating one.

After finishing The Lady's Slipper I had still more story to tell about Ella Appleby the maid. In The Lady's Slipper from Alice's point of view Ella is manipulative and lacking in morals. I wondered how she saw herself, and why she behaved the way she did, and gave her a book to herself to find out. (Though The Gilded Lily stands alone and you do not need to read the other book to understand the story.) Ella's saving grace is in her close relationship with her younger sister Sadie. The Gilded Lily explores the contrasting characters between the sisters as they struggle with their new lives and living with each other. One of the things I loved about writing them was that they were not the moneyed intellectuals who usually populate historical fiction. These were country girls, struggling to move upwards in society. I had to find a whole new language for them, a whole different set of moral values and aspirations. For them, perhaps stealing could be right, in some circumstances.

Once I started researching a whole supporting cast came along to help me tell Ella and Sadie's story - the handsome pawnbroker's son, the astrologer, the hard-nosed wigmaker, and the lovely lad with a love of stories.


‘There is no greater compliment than "give me more!" A delight’ Susanna Gregory
‘A beautifully-written blend of fast pace and atmospheric historical detail.' Gabrielle Kimm
'Superbly written dialogue makes the characters absolutely real' Charlotte Betts
‘Beautifully written and meticulously researched, the novel drew me straight into the teeming streets of Restoration London. An addictive, page-turning read’ Mary Sharratt

Looking forward to reading this!

Hi Ann, Thanks! I love the covers of your Quaker trilogy.Please feel free to post about them here.

Bring back the Frost Fairs! (Well, minus the bear-baiting.) I love the period and the premise. Hope we can meet face to face at HNS Conference in London in two weeks!

On my list to read, Deborah! I remember reading about that frigid winter in London in some of the research I've done. And of course the restoration of Charles II was such an interesting time. I am presently writing a novel (a sequel to one I have just had published) set in the last years of his reign. There are so many interesting invisible if imagined stories below the 'surface' of a society. Your writing in this 'intro' is lovely and I look forward to reading The Guilded Lily! Best of luck with it.