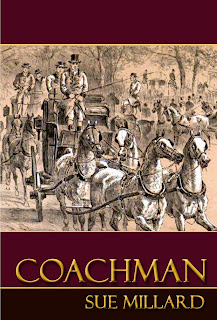 In 1994 a neighbour of ours asked me to transcribe a letter written by her great-grandfather William James Chaplin. A bookseller had bought it at auction and brought to show her. Neither of them could read his writing. I could… and that long, rambling letter with its air of ‘one-too-many-ports-after-dinner’ gave me the idea for the novel.
William Chaplin was a huge force in the London coaching business in the 1820s and 30s, yet the few stories about him that are recorded in books by his contemporaries all show him in an affectionate light. He was largely responsible for the abolition of heavy brutal driving whips in ’s coaching trade, and his vision was so clear that when the railways began to challenge his trade he was immediately stepped back, sold all his coaches and rebuilt his business on new lines. A thoroughly solid, sound, clever fellow.
When I realised how damn boring that story would be – with only the nice bits on display – I knew I had to invent someone humbler, so I could show what might have happened to the drivers, stablemen and horses when railways took the heart out of their daily life. Many of the drivers I mention in Coachman were real people in the Golden Age of Coaching, and some, such as Cross, wrote autobiographies during their twilight years for the benefit of Coaching Revivalists in later Victorian times. Their anecdotes were rich sources for this novel.
I thoroughly enjoyed the research that has been necessary, from the theatre productions of to the beginnings of the railways and the changing business plans of the Royal Mail. The task was made much easier by the digitizing of old and expensive books by the Internet Archive and Project Gutenberg, while the British Postal Museum and Archive were helpful in providing photocopies of such material as the instructions and route for the last-ever Procession of Mail Coaches on 17th May 1838. The icing on the cake was the drawing of the Procession by John Sturgess in my copy of The Coaching Age in 1885. It’s not a truly contemporary image but it captures the flavour of the scene beautifully and it made a perfect cover.
The setting among horses and coaches was easy to write about because I have been a carriage driver myself since 1985. Horses still work and misbehave in the same ways today as they did then, so speeds and difficulties were not hard to imagine. To get the full flavour of riding on a coach behind a four in hand I took part in a coaching run between and in 2011, with the Bowman family from Penrith. They are leading lights in the North West Driving Club and known internationally in competitive driving, and I have shamelessly stolen one or two of the comments that they have let slip over the years.
I have given George Davenport some rather forward-looking attitudes, such as his reluctance to be cruel to horses to get the work out of them that his timetable demanded. Such kindness was probably not typical of most men of his time, but I needed it to make him a warmer character, because his dedication to driving was obviously going to be a rich source of conflict with the women in his life. I gave him the name of my own great-grandfather, because he was a coachman in domestic service, though he didn’t work a commercial route, and he lived 50 years after Chaplin’s time. Although his wife, my great-grandmother, really was called Lucy Hennessy, she didn’t live in and my relatives will no doubt be relieved to hear that I have completely invented her unpleasant mother and their unsavoury history.
As for the rest of the cast, I am grateful to Jennie Hill for permission to write the novel and for giving me a copy of Chaplin’s family tree. He had 16 children, of whom Sarah was the only one of his children who died unmarried ( died aged 8 and Horace died in infancy). Nothing else is known about Sarah, so I could safely invent whatever reasons I liked to account for her spinster status. A former coachman remarked that Chaplin’s business was founded on “systematic application ... in which the female members of the family were called to assist,” so I decided to make her obsessed with business and power, determined not to lose them by marriage and yet tormented by physical desires that – due to the strict notions of propriety at that time – she had little hope of satisfying. The temptation to move the newly-married George to , to hold Lucy back with illness and leave him within reach of such a woman as Sarah was quite irresistible.

A fascinating author insight into how their book evolved!

This sounds an interesting, unexplored subject, and I liked reading about how you began to shape it into fiction. Also enjoyed your sample chapter on the blog. Good luck with the book!

thank you, ladies, and I hope you - and others - enjoy reading it.