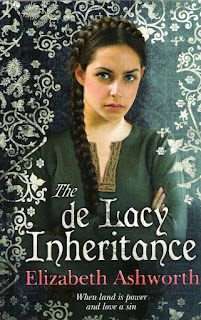 Although I’ve been a short story writer for many years I had never planned to write a novel −until I came across the story of a hermit who had lived in a cave under the castle at Clitheroe in Lancashire.

The idea took form when I was researching a non-fiction book, Tales of Old Lancashire, for Countryside Books. Whilst looking for more information about the hermit I discovered that he was claimed to be a member of the de Lacy family. As a local, some of the history of the de Lacy family, who were Lords of Blackburnshire, was already familiar to me, but when I realised that the hermit would have inherited a fortune except for his leprosy I wanted to know more about him.

Richard was a real person. He is recorded as Richard of Chester and as Richard, a leper. In those days, around the turn of the 13th century, those who suffered from this terrible affliction were forced to hear the Mass of Separation and make vows that included not entering any church or marketplace and not touching the rim or rope of a well except with gloved hands. Lepers were also excluded from inheriting, which is where the basic idea of my book came from.

When you go back a thousand years events are not always well recorded and that can be a good as well as a bad thing. Lack of finite detail gives the opportunity to fictionalise the gaps between the known facts, although known facts can be worked into the story.

So where does the truth end and the fiction begin in The de Lacy Inheritance? That’s not as easy to answer as you might think. One thing you learn when you’re researching for a historical novel is that there are many, many versions of the truth. Inaccuracies are often copied from source to source and sorting out the reliable from the unreliable is difficult and time consuming.

The lives of women and lepers are not so well documented as those of nobles, and there is much more information about Richard’s brother Roger de Lacy than there is about him and his sisters. The other main character in the book, Johanna, is based on a figure who is recorded as being a daughter of Roger de Lacy, but for the novel I decided to make her a sister of Richard and Roger as the ages seemed more appropriate. There is no clear historical record of her name and sometimes she is referred to as Maud or even confused with another family member Helen de Lacy, so I took a leap of faith based on very flimsy evidence and named her with the feminine version of John, who was either her father or grandfather.

In the end this is a story. It is fiction. Although it is based on known facts and on an old legend it is my interpretation of the lives of people who lived almost a thousand years ago. But they are very real and important to me and I hope that I have told their stories with integrity and not done them a disservice. As I continue with my research into the history of the de Lacy family I may discover facts that are at variance with the ones I’ve presented in the book. But I hope that doesn’t detract from anyone’s enjoyment of the story, because, in the end, it is a novel and not an academic history.

Deliverance from Evil by Frances Hill 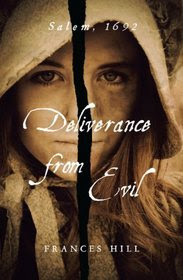 Writing Deliverance from Evil was like coming home. After working as a journalist for many years I had in the 1980s published two novels and hoped my future as a writer lay in fiction. But then unexpectedly I found myself writing a non-fiction book about the Salem witch trials. It had happened because when I visited Salem in 1992 I discovered there was, amazingly, no good, accurate popular history of this fascinating episode; I strongly wished to fill the gap. The result was A Delusion of Satan, The Full Story of the Salem Witch Trials, published by Doubleday in the US in 1995 and Hamish Hamilton in the UK in 1996. That book led, as a result in the first two cases of suggestions by publishers and in the third to my desire to express my strong conviction about the dangerous folly of war with Iraq, to three other non-fiction books, The Salem Witch Trials Reader (2000), Hunting for Witches, (2002) and Such Men Are Dangerous, The Fanatics of 1692 and 2004, (2004). After that I thought I had finished with the witch trials.

But the urge had been gradually growing to flesh out some of the characters and events of this tantalisingly elusive, though so well documented, episode, in fiction. In particular I felt I wanted to explore the personality and experience of a man who played a pivotal part but is far less well known that characters such as John Proctor, John Danforth and Rebecca Nurse. He was a charismatic Puritan minister who became one of those falsely accused. I had become fascinated by him during my research because of his intelligence, courage, wit and even, I confess, looks: he was "dark like an Indian," according to one of the contemporary sources, short but lithe and extremely stong, clearly highly attractive to women. I realised I wanted to explore George Burroughs' tragic but inspiring story in a way only possible by adding imagination and invention to patient reading and research.

When I began to do so, I found it thrilling to be writing fiction again, with George Burroughs and my other characters coming to life under my hands, beginning to make their own moves, speak their own lines, see through their own eyes . . .
Thanks to my American publisher, Overlook, Deliverance from Evil is blessed with a wonderful cover. It has now also been published, with the same cover, in the UK by Duckworth.

I have nearly finished another historical novel, this time not based on research for previous non-fiction works but again for the most part on historical characters. As every novelist knows, the joy of such creation is like no other.

Deliverance from Evil is available from amazon.com in the US and amazon.co.uk in the UK and from bookstores in both countries.

My website is www.franceshill.net
Posted by Deborah Swift at 01:50 2 comments: