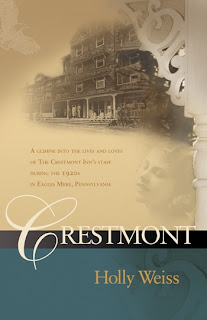 Perhaps you have heard the saying, “Barn burned down, now I can see the moon.”  I hated it when I first read it. Why? I was immersed in a barn burning in my own life. Post-polio syndrome, a condition that effects people infected with polio virus as children, often returns when polio survivors reach the age of fifty. The poliovirus infected me in 1952. Well-meaning doctors encouraged polio survivors to push past the muscle weakness and paralysis. I became an expert overcomer. I received degrees from college and graduate school and went on to a successful three-decade singing career. When unrelenting back pain presented itself after every concert five years ago, I had to retire. In addition, to conserve what little energy the post-polio syndrome left me with, I was forced to cut in half other activities in my life. I grieved for years because my voice, my primary means of creative expression, had been silenced.

Then, bing! On a lark, my husband and I stayed overnight at The Crestmont Inn in the Pennsylvania Allegheny Mountains. Our room was a luxury suite converted from a staff dormitory built in 1926. I envisioned what life must have been like for young people working a summer job at a bustling inn. Then I recalled this quote:

“Another opportunity is given you as a favor—and as a burden.
The question is not:
Why did it happen this way? or
Where is it going to lead you? or
What is the price you will have to pay?
It is simply:
How are you going to make use of it?”
…Dag Hammarskjöld.

We can be so entrenched in our idea of we want for our journey that we ignore God’s guidance in the turning of corners. He had to hit me over the head with a two-by-four to show me to leave my singing behind, write a book about The Crestmont Inn, and make use of what life handed me. One voice led to another.

Although I had never written a book before, a wonderful experience opened before me. I set the novel in 1920s Eagles Mere, Pennsylvania. Researching the history of the real Crestmont Inn enriched me. My music inspired me to imbue Crestmont’s main character, Gracie with the desire to sing. A Native American legend says that the Great Spirit flooded Eagles Mere Lake out of anger. I gave that a different twist, wanting to set the tone of grace around which Crestmont is built. In my novel, he cried tears of forgiveness. The eagles joined their tears with his, both mingling together to gently fill the lake called Eagles Tears or Eagles Mere.

Because grace had moved me past a sad impasse in my life, I wanted to emphasize its concept in the novel.  Crestmont main character, Gracie (purposefully named) is a courageous young woman who knows she needs to leave home to find herself. She’s not sure how she will work it all out. Allowing herself the opportunity to fulfill her desire to sing is uppermost in her mind. She says, “A dream, after all, needn’t be fueled by particulars, only desire.” Did Gracie become a famous cabaret singer? You’ll have to read Crestmont to find out. One thing I can promise you is that she found a spirit of acceptance and grace at The Crestmont Inn.

Writing was a natural progression from singing for me. Every song requires a different persona—a unique character the singer develops to make the song real. Inventing characters for Crestmont was an adventure I was well prepared for after thirty years of creating them in song. Violinist Itzhak Perlman said “Sometimes it is the artist’s task to find out how much music you can still make with what you have left.”

I am thankful that one voice led to another—the voice of a singer to that of an author. I loved every minute of the writing. The characters of Crestmont revealed their stories to me in imaginative ways and I thank them.

Several years ago my barn burned down, but magically, now I can see the moon.

Buy the Book:
Amazon
Barnes and Noble
All ebook formats

All Different Kinds of Free by Jessica McCann 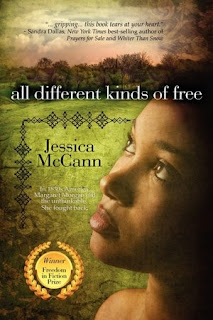 The story was inspired by actual events, specifically the U.S. Supreme Court case Prigg v. Pennsylvania, 1842. I first learned about it when I was doing freelance copyediting for a book about Supreme Court justices. The case appealed the conviction of a bounty hunter from Maryland  (Edward Prigg) charged with kidnapping Margaret Morgan, a free woman of color living in Pennsylvania who was alleged to be an escaped slave. The court case focused on state's rights, and the ruling represented the first time a major branch of the U.S. government made a proslavery stand. But I was most interested in Margaret and what became of her.

My original goal was to write a biography, and I spent about three years researching her life -- or, at least, attempting to research her life. The sad truth is that Margaret and her fate were irrelevant at the time. The issue for most people in the mid-1800s was much bigger than one woman's fight for freedom. Yet, to me, it was all about Margaret. When I realized I didn't have enough facts to write a biography, I was devastated and grudgingly packed away my research.

That's how my novel was born. Tons of secondary research went into the book. I devoured reference books, diaries, slave testimonials, newspaper archives -- anything I could get my hands on to help me better understand what the average person experienced on any given day in that era. That research provided the factual framework of the novel, and I filled in the blanks based on what my mind, my heart and my gut were telling me as each scene unfolded.

What really happed to Margaret Morgan? No one knows. What I do know is that she suffered a great injustice. And it was a similar injustice suffered by thousands of other women just like her -- wives, mothers, daughters -- during that dark period in U.S. history. That fact is what propelled the fictional story I ultimately wrote.

All Different Kinds of Free is available in trade paperback and e-book from Bell Bridge Books. Learn more at the official website http://www.AllDifferentKindsOfFree.com