Alice in Love and War by Ann Turnbull 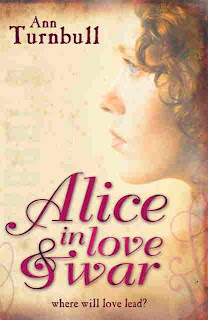 I first had the idea for a story set during the English Civil War more than a decade ago, when I was researching the background to my novel about the early Quakers, No Shame, No Fear. Among the details in my research folder I see that I made a pencilled note: “A girl falls in love with a soldier and follows him to the wars?”

That wisp of an idea became Alice in Love & War.

I knew the girl wouldn’t be wearing a low-necked silk dress and the soldier wouldn’t be a cavalier – or indeed a high-ranking officer from either side. My interest has always been in ordinary people and how historical events affect them. But exactly who my characters were would depend upon where the story began. I researched the war, its causes and its military progress. The conflict lasted several years, and I knew that a large part of my story would be about an army on the move. I would need to focus on a short but dramatic period. I chose the nine months or so between the King’s victory at Lostwithiel in September 1644 and his defeat at Naseby in June 1645. After the battle of Lostwithiel the King’s army was billeted for several days in and around the village of Peter Tavy on the moors above Tavistock. I placed my main character, 16-year-old Alice Newcombe, on a farm outside the village. She lives there with her abusive aunt and uncle. She’s unhappy. And then she meets handsome Robin Hillier, a corporal in the army and a charming rogue.

Alice in Love & War is a story of love, friendship and of a girl growing into maturity faster than she would have liked. Alice loves Robin and believes he will marry her. She runs away with him when the army leaves, joining the women who follow the baggage train. Most of these women who trudged behind the army on foot were either prostitutes or the wives and girlfriends of soldiers – women who’d chosen to share their men’s life on the road. Some may have had useful skills; others probably craved change and excitement. For some – like the young Welsh wives Alice makes friends with – their life in the camps was better than the life of arduous rural labour they left behind.

Most of the people Alice meets know nothing about the war. Their concerns are immediate: Where can I get food? Where shall we build a shelter? Am I pregnant – and if so, what can I do about it? What matters to them are their lives and loves, comradeship, mutual support, and survival in difficult circumstances. It is only when Alice, by chance, spends the winter season at a house of the minor gentry – a family and servants who are suffering loss and imprisonment – that she gains glimpses of the wider world.

The Civil Wars devastated Britain. Thousands died for a cause they barely understood. Soldiers froze to death sleeping in the fields. Armies moved across the land, looting and abusing. Alice is appalled by the hostility she encounters, and shocked by the cruelty she sees in her friends. But she holds fast to her own values, and in the end finds peace in uncertain times.

The Secret of the Glass by Donna Russo Morin 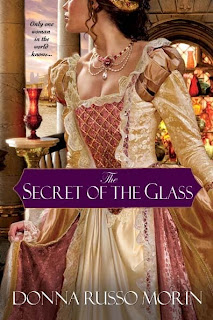 Like so much of life, the story and the title of my second novel really came to me in the most unexpected of ways. When Katie Couric became anchor of the CBS Evening News, I decided to watch to support her, even though I’m not a great fan of television news programs. Within that broadcast was a two-minute feature story on the glassmakers of Murano. One point in particular caught and captured my imagination: for hundreds of years the glassmakers of Venice were virtual prisoners in their own land, captives of a government determined to keep the prestige and profit produced by the glass. Within a half hour of viewing that story, I had a two page synopsis written, a plot that mapped out a story about a young Murano woman who must somehow save herself while protecting ‘the secret of the glass.’
In the physical sense, Sophia, the protagonist, is based on Sophia Loren; I think she epitomizes Italian beauty and she is a woman I greatly admire for her talent and her choices in life. The crux of Sophia’s conflict in The Secret of the Glass—whether a person can serve the needs of their family while honoring their own—is one I was grappling with at the time of the writing. My marriage had long broken down, and I struggled with the decision to divorce. Through her tribulations, and her decisions, I found my own path. As a second generation Italian American and a writer of European historicals, I really wanted to set a book in the land I consider my second country. Then, when I started my research, I found Galileo. I was unaware of how much time he had spent in the magical city of Venice. I knew nothing of the symbiotic relationship between him and this wonderful land. But I was astounded when I learned the professor suffered from a chronic illness, one similar to my own. I found kinship in his tale of determination, one echoed in the story of the land itself and the people that had made it so unique. Buona Fortuna, Donna Russo Morin
www.donnarussomorin.com
www.donnarussomorin.blogspot.com
Buy the Book
Posted by Deborah Swift at 02:47 3 comments: