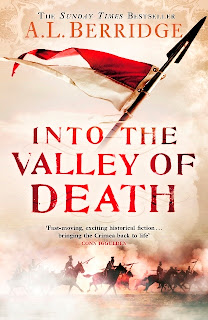 To buy ‘Into the Valley of Death’ on Amazon:
Louise's website: http://www.louiseberridge.com
Posted by Deborah Swift at 02:36

Thanks, Margaret - and I see you're another of us! I love maritime historical fiction, from C.S. Forester to Patrick O'Brien and Alexander Kent, so I must certainly get hold of 'Floating Gold'.

I think there are more and more of us creeping into the lines. Robyn Young is another cross-genre writer (the crusades) and my own favourite is Manda (or M.C.) Scott - the 'Boudica: Dreaming' series, and now her Rome series too. 'The Eagle of the Twelfth' is a must for anyone who likes Rosemary Sutcliff.

I loved this post. I went to Wikipedia - well worth a look at the link. And I'm currently reading Honour and the Sword - another by A L Berridge, and gripped by it.

Thanks so much, Deborah. I'm sorry about the paragraph breaks - I was sure I put them in, but they seem to have disappeared and left you with an unattractive splurge of text. :(

'Brethren' is great. One writer I know was told by her publishers that you're right - men are statistically far less likely to read a book written identifiably by a woman that they are to read one with a male or neutral-gender name. I gather there's been a serious statistical study of this, but I can't find it anywhere online.

Deborah, you're a techno genius. I once did a post on the History Girls that crashed the whole blog - and all because a single extra line had sneaked in afer a picture. I'm so sorry you had the trouble of fixing this one.

Glad you went to Wikipedia too. Do you see what I mean about the 'something odd'?

I loved this post. And how intriguing, looking for the 'something odd' on Wikipedia - I spotted it at once! Looking forward to reading the book.

Ann, how lovely to see you here! And yes, I knew YOU would spot it - if any writer knows how to spot a speck of gold in a historical mining pan it has to be the author of the Quaker trilogy.
What's odd to me is how few historians have picked up on it - like, er, none. The original chronicler, Alexander Kinglake, saw it all right and added a note to his history that the matter ought to be investigated - but then Kinglake too was a writer...