Mistress of the Sea by Jenny Barden 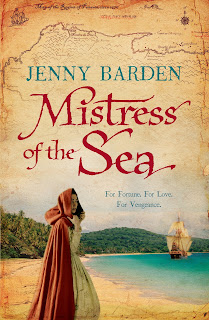 I'm invariably fascinated by the answers authors give to the 'What made you choose to write about that?' question, and now it's being put to me I find myself wanting to give two responses - the short and the more complex! The short answer is that as soon as I delved into the early life of Sir Francis Drake and unearthed the bare bones of his first great enterprise: the attack on the Spanish 'Silver Train' carrying bullion across the isthmus of Panama, I thought it would make a cracking good backdrop for a novel. This true story has all the ingredients of a rip-roaring adventure. It begins with Drake the little-known sea captain, smarting from the humiliation of having been forced to flee from the rout of John Hawkins' fleet in the Gulf of Mexico, determined upon vengeance for what he saw as Spanish treachery, and it ends with Drake the national hero who returned from his raid on the Spanish bullion supply in triumph, having masterminded an ambush that netted a fortune for himself and the Queen, cocked a snook at the Spanish, and proved that the might of King Philip II's empire was not invulnerable. In the run up to achieving this victory, Drake had endured a series of setbacks and reverses, the loss of over a third of his crew to disease, the death of two of his younger brothers (one killed in a skirmish and the other most likely a victim of yellow fever), the failure of two earlier attempts to capture Spanish treasure (the first of which resulted in his own serious injury), and the disaffection of some of his men which caused Drake to scuttle one of his two ships in order to prevent their desertion. It was only Drake's tenacity that kept the enterprise going. Then, in the end, an alliance with black runaway slaves (the Cimaroons) and French privateers (the Huguenots led by Guillaume Le Testu) gave Drake the manpower he needed in order to snatch victory from the jaws of defeat. This was a story in which a few individuals managed to achieve an act of singular significance. No more than 31 men returned to England out of Drake's original crew of 73, but they had severed the artery carrying Spain's life blood in bullion from Peru to fund her wars in Europe, and they had helped Drake set the course for the rise of England as a great maritime power.

As I unravelled what had actually happened, I began to imagine myself in this story, and to ask: 'What if a woman had been there?' and so the idea for Mistress of the Sea was born as an epic romantic adventure based on this real episode in history. Then a trip to Panama gave the concept even more impetus. I walked along parts of the Camino Real, sections of the original route for the Silver Train that have survived the passage of time and the flooding of the Panama Canal, and I saw the places where the hooves of pack mules over the centuries had worn hollows in the stones as they trailed over the rainforest clad mountains between the old city of Panama and Nombre de Dios. I walked through forest so thick that it was impossible to see even a glimpse of the sky, close to a hundred per cent humidity, plagued by flies and mosquitoes, and I felt I was drawing close to understanding what it must have been like. I had been down the mines of Cerro Rico: the 'Rich Mountain' of Postosí which was the principal source of the silver from Peru in the sixteenth century, and I had followed in the path of the conquistadors to many other places, so by travelling along the 'Royal Road' in Panama, and envisaging Drake's spectacular raid on the bullion in transit, I had a sense of the the pieces of a much broader picture slotting satisfyingly into place. That's the short answer.

The more complex explanation goes back to the roots of my writing before I ever imagined I might one day be a published author. I sometimes say that I became interested in history after an encounter with a suit of armour at Tamworth Castle, and it's true that I was fascinated with knights and the legends of King Arthur from a very early age, and that armour had a special attraction for me (perhaps because it had the potential to hide the wearer!). As a young girl, I wanted to do brave deeds, brandish a sword like Excalibur, and rescue maidens (or little boys!). I had an alter ego called Geni who would do spectacular things such as appear and disappear at will, run like the wind, and climb right to the top of very tall trees. And when everyone else had gone to bed, I'd be up, gazing out of my bedroom window in my home town of Burton on Trent, watching the town twinkling in the darkness beside the floodplain, and I'd imagine fabulous castles room by room, from the dungeons upward. No sooner was one properly envisaged in minute detail, from the stones to the heraldic shields, the trapdoors and secret passageways, than I'd move onto thinking about the next. I realise now that this was an ideal preparation for conceptualising and planning out a novel.

After proving to be a horror in infancy and getting into all manner of scrapes (probably because I wanted to chase dragons rather than dress dollies), I turned out to have some ability to pass exams and blessed with a natural talent for drawing (for which I have my mother to thank). So I left school to study fine art, then switched to law to earn a living and became a solicitor in the city of London, until the birth of four children necessitated a change in direction. Then it was back to painting, something which only came to a close after I saw the self-portrait by Carel Fabritius that hangs in the National Gallery. This picture so entranced me that it set me on a quest to find out more about the artist's short life (Fabritius died young in the explosion of the Dutch gunpowder arsenal at Delft in 1654). Such academic biographies as there were only fuelled my desire to tell his story as it came bounding into life in my mind. That was how my writing began: in secret and quiet inadvertently, since I had no particular desire to write a book and did not even think I could do so. I wrote a fictionalised account of the life of Fabritius and found an agent on the strength of it. The interest of publishers in that book led me to refine and hone and try again. I wrote about another artist a few generations earlier: an invented character based loosely on Juan Sánchez Cotán who was a conquistador in my story as well as being an illuminator and a monk. Thus my interest in the Age of Discovery was reawakened and then nourished by travels in South America. Gradually the threads of the passions which have run through my life came together: the love of art and a fascination with the ideals of chivalry; adventure and legend, and the romance of exploration. That second book came even closer to publication, but after being turned down at acquisition meeting because it did not involve English characters, I thought I would write next about my own countrymen (I include women in that!). And who was active in the New World at the time, foremost among the early English seafarers to come into conflict with the Spanish? Francis Drake. It was a natural next step for me to write about Drake's first great Caribbean adventure, and to want to add a compelling love story - the result was Mistress of the Sea.

I hope that many of you will enjoy the adventure, and I thank you for the interest you have shown in reading this. Especial thanks to Deborah Swift for her generosity in hosting this wonderful site.

Mistress of the Sea will be released in hardback by Ebury Press, Random House, on 30 August 2012 with the paperback to follow

Buy the Book
Posted by Deborah Swift at 04:15

Interesting article Jenny - I'm 1/4 of the way through my advanced copy of Mistress of the Sea - and enjoying the read!

Excellent! So pleased you're enjoying the read, Helen