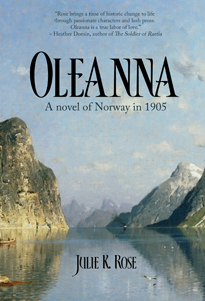 The immigrant story is a powerful one in the American psyche. We have so many compelling tales about the lives immigrants led once they came to this strange new land. But what about the families they left behind?

My great-grandfather John Myklebust was a successful homesteader in North Dakota in the early 1900s, but he left something behind: his two spinster sisters stayed on the farm in Jølster, Sogn, Norway. Their names were Elisabeth and Oleanna.

Oleanna is set during the separation of Norway from Sweden in 1905, and it's an imagining of Elisabeth and Oleanna's lives. Who were these women? What were their stories? Why were Oleanna and Elisabeth still living together, alone on the farm, until their deaths (94 and 92, respectively)? Why did they never leave Norway? Why did John decide to leave? What were their lives like? What was it like to be left behind?

As a matter of fact, I learned a lot about myself as I wrote this book. The idea for the story came to me very suddenly, in November 2006, with the image of Oleanna on the top of a mountain in Norway, her long blond hair being whipped by the wind. I'd never seen a photo her (except in advanced age) so this was quite a surprise. But she appeared, right when I needed her, and I couldn't turn my back on her.

The writing process was difficult, from an emotional standpoint; I started writing Oleanna six months after my mother died. The themes and characters were very close to the bone, and I needed to take breaks to get my brain recalibrated and come back with fresh eyes. In fact, I wrote (and edited, and rewrote) another novel, and made a start on two others, while I was writing Oleanna.

But in the end, I always came back to her, fascinated by her story and her struggle. Though the book was inspired by my family, Oleanna became her own character, and accompanying her on her journey through the fascinating changes in early 20th century Norway was both a thrilling challenge and a true honor.

Oleanna: A Novel of Norway in 1905
http://oleannanovel.com

Oleanna can be purchased online through any retailer (B&N, Amazon worldwide, iBookstore worldwide, Powells, Indiebound.org, and more) in both paperback and ebook formats. The U.S. amazon link is: http://amzn.to/VlYhQb .

This sounds like a wonderful novel, Julie, and it is going on my must-read list! Thanks for sharing what brought you to it and the long and not always easy process of seeing it through to completion and publication. I so relate! Diane